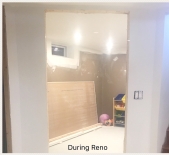 Our basement was a place to just let the kids be kids. They got to do whatever they wanted to do and play without having to worry much about how it looked like. As you can tell on the pics… pretty embarrassing to show you, but that is the way it was. The way it is; real life. It also helped during those cold winter months and rainy days for them to just run around and get all that energy out. And now that I look back at those pics it looks like a dumping ground! I must admit it was hard keeping up with their mess.

Well, we had made major changes to that. Now that we are expecting baby #5 we needed to have some changes. We got rid of some “old” things we had, added a bedroom, bathroom, a playroom, and a sitting area.

As you can see from the pics, it was dark. We had regular light bulbs with a pull string to turn each one on, bare ceilings, concrete floors with different rugs and a carpet that was starting to unravel, half a wall missing (I’ll tell you why in a bit), and windows that were so old that the previous owner had continued to just add caulking to them to “fix” it. Since moving to this house we only replaced two of the windows; the only two windows that aren’t covered with insulation. The reason we had replaced them was because the windows were leaking. You see where half the wall is missing? Well that was because we couldn’t find the source of the water leak that we had up against that wall, so we opened the walls up to find it. We were afraid it was going to be a crack on the foundation, and that was our biggest fear! Turns out that is was the windows the whole time. Phew! Mind you that we have a dry basement, and it was one of our biggest lookout during our house search. So as you can see how this was a big surprise for us. Luckily, it was a minor incident that was affordable to fix.

For the past year of 2017 we have been doing a lot in our basement. During the Spring we replaced the rest of the windows ourselves. Ok ok my husband did it. And we saved thousands of dollars doing it ourselves! Just to do the two windows (see pics #2 & #3) it cost us to have someone else do it for $800! So we decided to do the rest ourselves. We went to our local home improvement store (aka Home Depot) and bought the windows. We needed to replace 6 windows, so we bought 6. The total amount for all 6 windows was about $450! And these are made by Anderson Windows and are the energy saver type. We had a plan B if instilling it ourselves didn’t work. Call the pros! LOL! Luckily for us, my husband is so handy that he successfully did it! It has now gone through 3 Seasons so far and no leaks. In fact, during the Summer it stayed cool in the basement and during this cold season it is staying warm. I call that success.

During the Summer, we added pod lights to the celling which was a great addition for a basement; especially, when the ceilings are low to begin with. Now the basement is so much brighter too! Plus, we had the light switches to have a dimmer.

While I went to see my family in Arizona for a week this past Summer, my husband stayed home with all 4 kids and surprised me with the framing being completely finished when I returned! I couldn’t believe that he did it in a week’s time. I tell ya, he’s a hard worker and I am so blessed to have him. Not to mention that he did such a great job with the framing! Grant it, it wasn’t structural framing but still! He did it all on his own, with my design, and professionally done. Now isn’t that the greatest gift to come home to?

During the Fall season, my husband did the dry wall for the walls and ceilings. He nailed the drywall, taped it, added 2 coats to the dry wall, and sanded it. It was a lot of work. I didn’t do a thing, but seeing him work on it had me exhausted. Anyone that knows about drywall knows how much work is put into it. Especially the sanding. Yuck! Not only is it physically exhausting, but it is very messy! Dust is everywhere, even when we covered the area with plastic, the dust gets out and takes days to finally get rid of it all. So get ready to dust during that time lol.

On pics #5 and #6 on the before and during reno, you can see that we added a wall in between that room (which becomes the kids’ playroom) and the stairs. Which was a big transformation and the best thing we have done! I love how it divides the spaces. This week’s project will be moving the banister to the other side of the wall; which, is the longest side of the stairway. I’ll be posting all about it this week.

Last week, we got to order the carpet and paint the walls. More about this later this week as well and with pictures!

Below: the pictures are not filtered. They are original, so you get to see how it really looked like. We all love a good before and during reno pics right?

What do you all think so far?

*To see my future posts subscribe to my email subscription box on the top right side of this post, and you will receive a notification via email you provided of every new blog post I post. Thanks for following along!

I am married to a wonderful man who works hard both at his job and here at home. We've been married for over 12 years now. I am a mother of three girls and three boys all under the age of 11. We proudly have a cat named Sophie. I have a fond love for sewing and being creative in anything I do. I also love baking and cooking not so much lol, but I love it when my food turns out to be a family favorite! I'm a wannabe photographer and decorator ;-P ~Elizabeth~ View all posts by Elizabeth